Click here for a copy of our most recent annual report.

This year has been difficult and challenging for students, staff, and administration on college campuses everywhere. While we prioritized public health and safety, we knew that political activism and engagement of young people was going to be critical this year as we faced an election, the threats of climate change, and so much more.

So, we set out to continue our program from behind our screens and opened up our Google Docs. And it worked! This year we engaged record numbers of volunteers and we won or made progress on a number of important issues. We wanted to share our annual report with you to look back on what we’ve done this school year.

Reflecting on the past year also makes us so hopeful for what we can do in the future! There has been so much progress in the past year, and we’re excited to continue playing our part in advocating a greener, healthier, and more meaningful future for us all.

Check out some highlights from our priority issue-area work from this year. 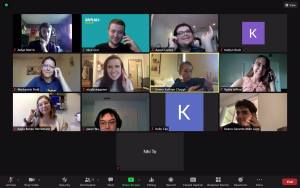 This past year CALPIRG Students worked with the Secretary of State’s Office, the UC Student Association, and student governments to help register and mobilize students to vote and participate in our democracy.

The full participation of young people in the political process is essential to a truly representative, vibrant democracy. Young people are now the largest and most diverse group of potential voters in the country. But we know that historically 18-24-year-olds are less likely to vote than older generations. This year we wanted to change all that.

Given the challenges of the pandemic, we knew we’d have to adapt our tactics to reach our fellow students, and engage the campus community while at home- and it worked! 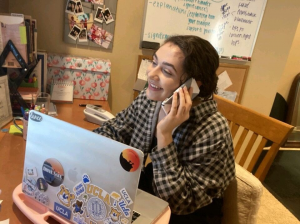 The Center for Information and Research on Civic Learning and Engagement (CIRCLE) released youth voter turnout (ages 18-29) numbers and it was historic! In California, youth voter turnout increased from 37 percent in 2016 to 54 percent in 2020. This is the highest in nearly 50 years, since the passage of the 26th Amendment that lowered the voting age from 21 to 18 in 1972.

But the increase in turnout didn’t happen on its own. It happened thanks to the work of young people organizing their peers around California, including hundreds of students who worked with the nonpartisan New Voters Project to engage their campus communities and help thousands of their peers register and turn out to vote!

Despite the fact all of this work was virtual, we are excited to announce that our project to recruit and train students to mobilize their own communities worked! 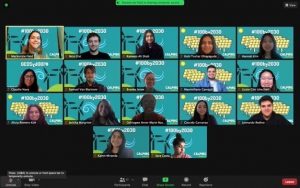 Burning oil, gas, and coal has polluted our air, water, and land for decades – and now it’s changing the climate even faster than scientists feared it would.

We can have healthier communities right now and a livable future for ourselves and generations to come. But to get there, we must transform the way we produce and consume energy. That’s got to start with a commitment to 100% clean, renewable energy.

In recent years we’ve worked in partnership with the University of CA to announce a commitment to 100% clean electricity, and organized at the statewide level to pass a similar policy through the legislature.

But there is more work to do. A 100% clean energy future means shifting from dirty energy to completely clean energy sources wherever and however we can and as quickly as we can. In order to make this transition fully, we concurrently need to phase out forms of dirty energy in our state – especially new projects to drill for oil.

In February over 150 student leaders met with 70+ state legislators at our Clean Energy Lobby Day. We asked our representatives to support AB525 (D-Chiu) to increase offshore wind, SB617 (D-Wiener) the Solar Access Act, and SB 467 (D-Wiener, D-Limon) to ban fracking. We also turned in 18,000 signatures to Governor Newsom’s climate advisor in support of speeding up California’s transition to 100% clean electricity to the year 2030. In addition, we joined forces with Environment California, Kennebunkport Climate Initiative, the Climate Center, and 350 Action to host panels and actions throughout the day.

After Earth Day, Governor Newsom announced a ban on new fracking wells by 2024 and called on our air resources agency to end oil and gas drilling by 2045. This is the beginning of the end of oil in our state, and something CALPIRG Students has advocated for through our Students Against Fracking Coalition for the last 8 years.

Every day, people throw away tons of plastic “stuff”—cups, plates, bags, containers, forks, knives, spoons and more. All of this waste not only clogs our landfills, trashes our parks, and litters our streets, but it also washes into our rivers and oceans, where it can harm wildlife.

The good news is that we have lots of alternatives to single-use plastic items that would prevent needless harm to the environment. We helped pass the first ever statewide ban on single-use plastic grocery bags in California, and we defended that measure at the ballot box when the plastics industry tried to repeal it. 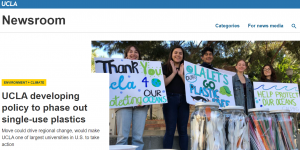 And our universities are also leading the way towards solutions, spurred on by students organizing for change. That’s why in fall of 2019 our team at CALPIRG Students launched a campaign with the goal of banning single-use plastics at the 10 University of CA campuses.

Across the UC system CALPIRG organizers and volunteers built a movement of student support for stronger limits on plastic use on our campuses. Statewide we collected over 12,000 signatures from supportive students and passed resolutions of the student governments, met with key university stakeholders and played a big role in developing the policy with UC zero waste committee, and held public events on local beaches with legislators to highlight the problem of plastic pollution. Through these efforts we won!

UCLA took the first step to announce a strong ban on non-essential foodware plastics on campus, and then UC Berkeley followed suit and developed one of the most comprehensive bans on single use plastics in all campus facilities!

In August, we worked with the University of California campuses to announce they would start phasing-out single-use plastics, paving the way for campuses free of non-essential plastics by 2030.

No Bees, No Food 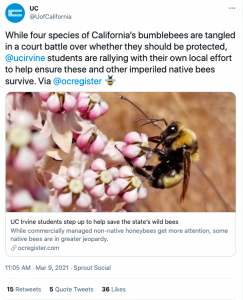 Bees pollinate most of the food we eat – from apples to strawberries to chocolate. But beekeepers report they’re losing 40% of their bee colonies each year.

That’s why CALPIRG Students worked with UC Irvine to apply to be a “Bee Friendly Campus” and protect pollinators.

This winter UC Irvine became a Bee Friendly Certified Campus, thanks to the work of student activists and support they’ve built with students, faculty, and administration. UC Irvine joins the 3 other UC schools where we worked to become Bee Friendly- UCLA, UC Davis, and UC Berkeley.

This year, we released the 3rd edition of our report on the broken textbooks market. We found that students continue to skip buying assigned textbooks despite concerns it will impact their grades, and we found that the pandemic only made the problem worse for the most impacted students.

This year student leaders organized support around the state for a stronger OER program at the UC’s. We worked with the State Student Association to pass a support resolution and passed resolutions locally at UC Merced and UC San Diego. We also mobilized professors and got the issue in the news by hosting panels and events during annual Open Education Week.

This year, a CALPIRG backed bill, the CA Student Borrower Bill of Rights was signed into law. This bill will protect students from ‘debt traps’ or being taken advantage of by lenders.

We partnered with the UC’s on the Campaign to Double the Pell Grant.

Students organized at their campuses to collect petitions in support of the #DoublethePell campaign to double the maximum Pell Grant, and we delivered all those signatures to legislators and their staff. We also shared personal stories that illustrated the immediate impact Congressional reinvestments in the Pell Grant financial aid program would have, and advocated for increased funding for emergency students grants. In all, we met with over 75 offices.

Our UCLA Chair also represented CALPIRG Students and UC student voices in a meeting with the new US Secretary of Education Miguel Cardona.

In 2020, CALPIRG Students was recognized for the tangible change our student leadership program has made toward a cleaner and more meaningful future. We were nominated for an American Climate Leadership Award alongside organizations like the Sunrise Movement and the Future Coalition. And WE WON! We were recognized for not only building a large movement of climate activists across the UC system, but for winning our campaign and committing the UC System to 100% clean purchased electricity. We are honored by such an award, and grateful to our partners at the UC for working with us to make this 100% clean energy vision a reality.

Every year we run a large volunteer and internship program to give students the opportunity to take action on important issues they care about, and the skills to do so. Every term, we start with an intensive campus outreach effort designed to educate the campus about pressing social issues, and also recruit new volunteers and interns.  Through those efforts, each year we educate thousands of students through class presentations and many more through campus events and email or social media outreach.

This year alone we’ve engaged over 2,800 volunteers, and 1,600 students participated in our internship program. CALPIRG Students interns learn skills like how to organize an event, recruit and train volunteers, work with the media, and lobby elected officials.

Thanks for a great year! Check out our full annual report here!