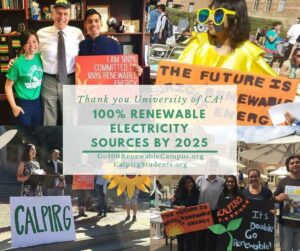 Burning oil, gas and coal has polluted our air, water and land for decades. Now it’s changing our climate even faster than scientists feared it would. We know we can have healthier communities right now and a livable future for ourselves and generations to come. But to get there, we must transform the way we produce and consume energy. That’s why we’ve been working to transition our communities to 100% renewable energy.

Working on 8 University of California campuses, our California chapter CALPIRG Students ran and won a campaign for a UC-wide commitment to 100% renewable electricity. With 238,000 students across 10 campuses, UC’s new plan to run completely on electricity from renewable energy by 2025 is the farthest-reaching campus commitment in the country.

Our strategy to win depended on building widespread support for climate solutions. We educated 30,000 students through class presentations, signed on 20,000 students to a petition calling for a commitment, signed on 100 faculty in support, got UC student governments to pass resolutions in support of the campaign, met with administrators and elected officials, and brought together 200 student leaders for multiple Clean Energy Lobby Days.

Our team also worked simultaneously to pass SB 100, a California law that puts the state on a path to generate 100 percent of their electricity from renewable and zero-carbon sources by 2045.

In addition, these two huge victories in the movement for 100% renewable energy helped spark a cultural awakening of what’s possible, and as we hoped, it’s leading to further action.

Just a few months after these actions, our chapter at UC Berkeley convinced the university to make a commitment to 100% renewable energy by 2050. This includes electricity, heating and cooling, and transportation. And now more universities like Vanderbilt and the University of Arizona are following suit.

For our work CALPIRG Students was awarded the 2020 American Climate Leadership Award. 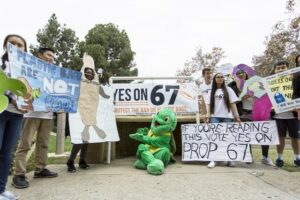 Plastic pollute our ocean and harm marine wildlife. That’s why CALPIRG worked for eight years to help make California the first state in the country to bag single –use plastic grocery bags. But right after the historic state law passed, big plastic companies qualified a ballot measure for the November 2016 Election to try to repeal our ban on bags. We then launched a campaign to mobilize students on campus to turn out in support of Prop 67 to protect the bag ban. Across the state we educated 30,000 students on the issue through class announcements, mobilized over 10,000 students to pledge to vote yes, organized press events both on and off campus to get media attention on the issue. Our most successful press event was our Save the Bag Ban Alternative Spring Break Tour where we organized 30 students to spend their spring break doing press events with local elected officials in seven cities from Oakland to San Diego. After months and months of hard work, we are proud that California voters saw through the deceptive ballot measure and voted to continue to protect our ocean.

In recent years CALPIRG has worked to ban all single-use plastics on college campuses. Across the UC system CALPIRG interns and volunteers built a movement of student support for stronger limits on plastic use on our campuses. Statewide we collected over 12,000 signatures from supportive students, met with key stakeholders at the UC and help public events on local beaches to highlight the problem of plastic pollution – and through all those efforts we WON!

First, in December of 2019 UCLA became the first in the UC system to announce a new commitment to reducing unnecessary single use plastics. Through a collaborative effort between dining, CALPIRG volunteers and the sustainability office they released this new commitment in January.

In March UC Berkeley went one step further, and thanks to the efforts of the UCB CALPIRG chapter Chancellor Christ signed a commitment to banning all non-essential single use plastics. This commitment goes beyond just plasticware in the dining halls – but non-essential plastics everywhere. From labs to stadiums to the dorms UC Berkeley leads the way with one of the most comprehensive plans to reduce plastic pollution in the country.

Finally in August we got University of California campuses to announce they would start phasing-out single-use plastics, paving the way for campuses free of non-essential plastics by 2030. 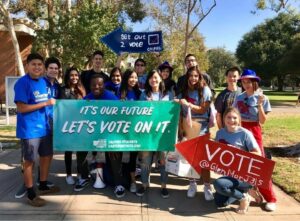 In 2020 CALPIRG Students has been hard at work to help register and mobilize students to vote and participate in our democracy. Our team has registered over 10,000 college students across the state! We worked at the University of California and 15 total campuses across the state including Cal States and private colleges, we made announcements in over 600 virtual classrooms about registering to vote or voting safely in their academic classes via Zoom, we did hundreds of hours of peer to peer voter registration phone-banking, and worked with universities to send out 14 emails to the entire student body with a link to the CA Student Vote Project’s portal castudentvote.org. We also worked in coalition with the UC Students Association and the Cal State Students Association and partnered with the CA Secretary of State on the Ballot Bowl and many of our institutions made it into the top 10!

On the voter registration deadline, we did 150 class presentations in 1 day and sent 30,000 texts to make sure every college student across the state updated their registration! We also co-hosted the “CA Student Voter Conference” with the UCs, private colleges, the Cal States, and the Secretary of State’s office to launch off our voter registration drives, and start making our plans for huge voter registration even before school started. Student leaders like our CALPIRG Board Chair Nic Riani spoke at the conference about the work his chapter at UCLA has done to create a culture of voting on campus!

By Election Day today, we had signed up over 5,000 volunteer hours for phone-banking and today we have already surpassed our goal of contacting 70,000 students to help them cast their ballot. Our Election Day virtual Election “Vote-A-Thon”, co-hosted by CALPIRG, UCSA, and the Secretary of State’s Office is an all-day-long volunteer event to get out the vote, and features speakers like Senators Hannah Beth Jackson and Nancy Skinner, Vice Chancellors from UC Santa Barbara and UC San Diego, and Student Government representatives from across the state! 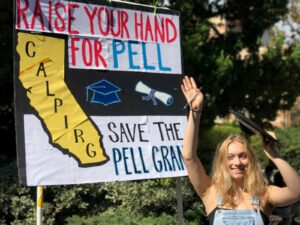 The Pell Grants are the foundation of our national investment in higher education, and are essential for ensuring low-income students have the opportunity to attend and complete college. That’s why we joined higher education organizations around the country to stand up to a proposed $2.3 billion cut from the Pell Grant surplus. Over the course of the year we collected petitions to our elected officials and sat down the staff of Senator Boxer and several members of the House of Representatives.  And we won! Last quarter, Congress passed a budget without a single dollar taken from the program. 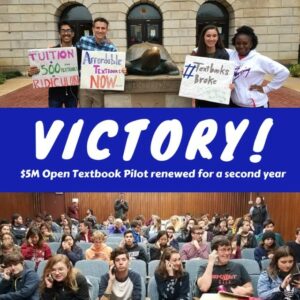 We’re working to make textbooks more affordable by promoting online educational resources while also educating faculty on the burden caused by online access codes that require payment to access homework online. We worked to convince Congress to include the first ever investment in open textbooks in the federal budget. The $5 million pilot program at the federal level is expected to save American students more than $50 million dollars.

Stopping the Overuse of Antibiotics on Factory Farms 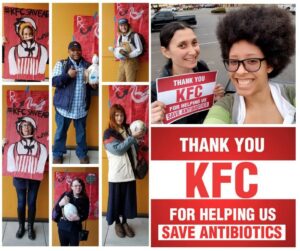 We are at risk of entering the post-antibiotic era. Since their introduction, antibiotics have been a staple in protecting the public health. However, their overuse has led to the creation of “superbugs,” which cause illnesses that can’t be cured. Last year 2 million Americans got antibiotic resistant infections, and 23,000 people died. This is happening partly because 70% of antibiotics are sold to factory farms, where they are used on animals that often aren’t even sick. We have to stop the overuse of antibiotics, and protect our life-saving drugs. In March 2015, we helped convince McDonald’s to stop serving chicken raised on our life-saving medicines. Shortly after, Tyson Foods, a major chicken producer and McDonald’s supplier, followed suit. Then, in October, we convinced Subway, with more restaurants than any other chain in the United States, to make a commitment to stop serving any meat raised on antibiotics, starting with chicken by the end of 2016. In April of 2017, KFC announced their commitment to stop serving chicken raised on medically important antibiotics by the end of 2018.

Read more about our history here